FIND OUT MORE
**Due to Essential Maintenance the ArcelorMittal Orbit is temporarily closed. We hope to reopen Wednesday 1st March - we can't wait to see you again**
BOOK NOW

A HAIR-RAISING LONDON EXPERIENCE
THE SLIDE

Adrenaline has reached new heights at the ArcelorMittal Orbit, giving you experiences unlike anywhere else in the capital. Call yourself a dare-devil? Then tick the world’s longest tunnel Slide off your bucket list! At 178m long, the 12 twists and turns wind through the UK’s tallest sculpture finishing with a devilish corkscrew section named the ‘bettfeder’ – after the German word for ‘bedspring’.

During the descent, you’ll catch glimpses of the Park and London’s skyline through the transparent sections before plunging into darkness – leaving your mind to guess which direction you’ll drop next!

The Slide was created by German artist Carsten Höller at the invitation of Sir Anish Kapoor, designer of the ArcelorMittal Orbit. It is a unique collaboration between two of the world’s leading artists and a major art installation for London, as well as yet another reason to visit Queen Elizabeth Olympic Park – London’s most exciting destination! 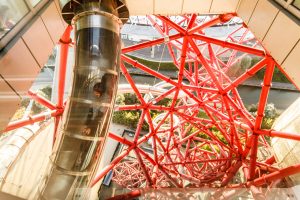 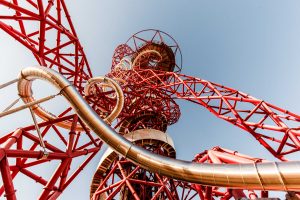